Facing the hills of Rwanda

« Facing the hills of Rwanda »

by Ignace Fabiani
Created in 2019

A storytelling performance that takes us on a journey to discover the remarkable country of Rwanda. The storyteller’s voice blends with the sounds and songs recorded directly in Kigali, the capital of Rwanda.

A heartfelt, funny and sometimes dramatic show, inspired by a true story.

DOWNLOAD THE PRESENTATION FILE OF THE SHOW BY CLICKING HERE !

Joseph, a 24-year-old French, goes to Kigali for 6 months to work with young people living on the streets. As the show progresses, a multitude of engaging characters add color to the narrative: an energetic rapper who learned English by watching Bollywood movies, an educator always full of hope and projects who survived the genocide, a proverb-loving night watchman who never leaves his classy jacket and toreador mustache, an orphan girl who now pilots a drone…

Thanks to these endearing characters whom Joseph wants to know, to understand, we discover little bits of Rwanda’s history !

Simple and unadorned, the staging brings us to the borderline between storytelling and reading. The actor-storyteller, alone on stage, tells us this unique story and takes us on a journey to Rwanda. His words are accompanied by the sound ambiences recorded in Kigali and songs that punctuate the show.

“More ecological and cheaper than a plane, this sure takes us to Rwanda!” Alison

« I like the simplicity with which you paint the scenery of Rwanda. Smells, colours, sounds… I was there with you. Should be prescribed to candidates who want to work in an NGO!  » Raph

« A poetic and moving show, that blends individual stories and History in all simplicity and authenticity. » Loic

“For a Rwandan citizen, this show is really exciting. You have managed to paint a realistic portrait of my country and its history. It’s amazing, because you really take all the spectators on a trip to Rwanda! And I laughed a lot with the Rwandan proverbs… Murakoze cyane !” Alexia

« The connexion between text and sound is remarkable! It makes the actors of this journey even more present. » Yvonne

« A gripping, immersive, well documented, devastating and luminous story that transports us into the contours and limits of our history. » Marien

« This tale makes us discover a country we can’t forget! Your words make the atmosphere and questions of this emerging country palpable. It makes me want to learn from Rwandans! » Françoise

« Congratulations on this show! I appreciated the progression of the text, which brings us first in the atmosphere of this youth centre with the everyday life of these kids, before talking about the genocide and all the suffering it has caused. And now the rise of hope today! » Marie Cécile

« It was nice to sit for one hour on that wooden bench in Kigali with you. » Martine

Today I am looking for financial support to bring this show to English speaking countries !
https://chuffed.org/project/help-fund-a-show-about-an-inspiring-experience-in-rwanda

Your support is precious ! Thank you !

– Innocent. At 17, he’s the youngster who speaks the best French among the inhabitants of the center. At the same time reserved and enthusiastic, he’s become my official guide.
Medium-sized, shaved head, he has an elegant face with a scar just above his left eye. He’s always wearing brown shorts with yellow crocs. In June, he’ll complete his last year of primary school; at the age of 17… His father, brothers and sisters died during the genocide when he was only 2 years old. But when he talks about them, he prefers to say that they now live in the United States and that one day he’ll join them ! At the age of 10, he left his mother and his village to come to Kigali. Looking for work, looking for a life. After 4 years on the streets, he landed here in the Inzu Center, and managed to get back to school. When he speaks French he’s a little shy, hesitant. But when he speaks Kinyarwanda, he’s almost authoritarian. With the young people who live in the center, he’s clearly the boss.

– Snoop. A 15-year-old youngster who loves music. Everyone calls him Snoop because he’s always dressed up like Snoop Doggy Dog. Cap or bandana, rings and basketball jersey too wide… He’s even growing a small goatee. He speaks bad French, preferring the English of his idol. The other day, he explained to me how he learned Shakespeare’s language. For several years, he’s been attending Bollywood movies in a little “shed cinema”. These are in Hindi, with English subtitles. A person next to the TV, gradually translates them into Kinyarwanda. One day, Snoop started coming with a notebook, copying the words on the screen and linking them to the translator’s words…

– Béatrice. The director of the Inzu Center. Small, charming, with a smiling and energetic face. During my first few weeks in Rwanda, I had some pretty heated discussions with Beatrice about the « role » I was going to play in the youth center. In our first exchanges before my arrival, I had explained that after some tough experiences in Togo and India, I was coming to Rwanda, first to meet these young people. By email, Beatrice had said yes, but now that I’m here, she would still like me to do something… I don’t know… at least some accounting, or grant applications, or anything… Like Innocent, she cannot imagine that a white man doesn’t really want to do anything “useful”, “effective”… Despite our misunderstandings, she’s always very positive, smiling and blooming. Modeste, the night watchman, told me yesterday that she has a painful history, having herself survived the 1994 genocide, during which she lost many family members, including her husband.

– Modeste. His official role is between a guard and a night educator, unofficially I’d say between wiseman and madman. Half Congolese, half Rwandan, he’s very tall with a small mustache that makes him look like a bullfighter. Always in trousers, shirt and a classy jacket, he’s a colorful character with whom I immediately hooked up. We spend

our evenings talking in his singing and colorful French. He loves to quote Rwandan proverbs from behind the bundles : “Even the crowing rooster was one day an egg.”

– Marie-Ange. A tall, athletic young woman, with very short cut hair, who lived herself 4 years on the street before being coming to the Inzu centre. She is now a renowned graphic designer.
Modeste talks about Marie-Ange: « Can you imagine that this girl was living in the street ten years ago? If you see her today, you can’t believe it. Marie-Ange was here when the center was created in 1999. She was 14 years old. Now she has her own communication agency! Her own house. A husband, one child, and even… a fence !”

Note of intent by Ignace Fabiani:

Rwanda is a country which has fascinated me for more than 15 years ! First, through the reading of several books. Then, in 2006, I discovered Rwanda for « real » by going to Kigali to do my end of school internship in a center that welcomed young people living on the streets. A very enriching and demanding experience through which I discovered the daily ingenuity of these youngsters.

Inspired by my personal experience, I created this show « Facing the hills of Rwanda », that immerses us in this astonishing country, the paradoxes of which I seek to capture.

The ambition of this story is talk about the complex reality of Rwanda, its bright and dark sides. To share the difficult legacy of the genocide, but also to show the depth of what we can learn from Rwandans. By telling the inspiring story of some survivors who despite their history are leaders of peace and change in their community. By showing how this resilience has something universal to teach us. By testifying to the contagious curiosity of many young Rwandans who, despite their precarious situation, believe in their future !

« Facing the hills of Rwanda » is nourished by my experience with the young people I met in Kigali, the emotions I shared with them, my passion to understand the issues and the complexity of situations in order to share them in a nuanced way…

I went back to Rwanda in 2009, then a third time in 2017, to feel the current temperature of the country and record the sounds for this show.

Today I feel the need to bring these life stories, words, testimonies on stage. For the public it could be an opportunity to take a step aside, to try to put on the other’s glasses, to connect with alterity. My humble hope is to take the spectator on a journey from which we can both come back home transformed!

Just the text, the story and being a part of it.
Just the breath and the voice of the storyteller rather than an actor « on stage »…
Getting rid of the unnecessary emphasis and giving the spoken word its evocative force.
Getting rid of the idea of occupying the stage… or reinventing it as we go along.

Refocusing on the strength of a story that tries to speak the unspeakable…
Making us love these characters whose silence and resilience beat the rhythm of life being rebuilt…
Keeping our Western memory alert and awake….

Keeping the tragic at bay with the strength of humour…
Letting the storyteller’s eyes rest on us, and touch us with simplicity.

Telling the stories of women, children, men from Rwanda; but through them, talking about all the genocides, leaving a trace and continuing at all costs to believe in humanity !

Welcome to Ignace Fabiani’s hills of Rwanda. Listen to the music of his words that mark the rebirth of a country… despite everything…

Since 2011, Ignace Fabiani has been working regularly as an actor in the Artiflette theatre company (based in Barraux, Isère, France). There, he has created two shows with Claire Davienne:

This intimate performance speaks of everyday life, of death, of our ways of resisting. It is a waltz where the words dance with the music…

This show has been played over a 100 times in various places: festivals of Avignon and Aurillac, theaters, libraries, in Quebec, …

Extracts from the Guestbook:

« Time is suddenly suspended. With every word, each one of us can identify with our strength and our fragility.” Françoise
« Thanks for the lively company of your words and the chello. And for the smiles that you brought to the listeners lips. « Christian Bobin 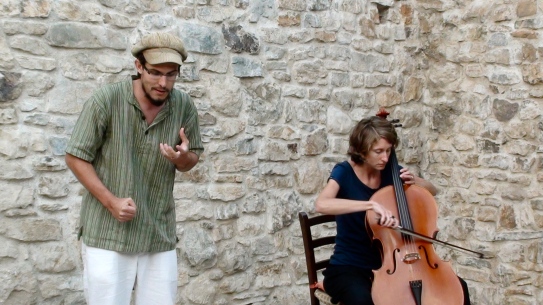 Ben and Charlotte decide to move to a low-income housing project to experience the famous « social mixity and diversity ». The account of their daily encounters in this neighborhood show a reality that isn’t often heard in the media, and echoes the words of the poet Guimaraes Rosa, « Telling, is resisting ».

A show between theatre and storytelling, woven with words and music, inspired by a true story

« Thank you for this testimony of life in the heart of a low-income housing project, a territory that has become so symbolic, even part of our very French contemporary mythology. Your text arouses sincere curiosity. We salute what we have felt as the exercise of an honest and respectful perspective, without any literary effects, searching for your own voice and thus waterproof to media contaminations… a viewpoint that we could also be ours and thus reveals itself so precious. »
A Mots Découverts, an organization that accompanies playwriting